Are you excited for Black Spartacus yet? After checking out this great promo video you definitely will be. Share this video and let the world know about this great play.

Not enough? We have another great teaser trailer

As part of our continuing series production profiles we take a look at actress Allison Mason. Allison will be playing the role of Mambo Cecile in the play Black Spartacus.

Alison has been since 1994 appearing as Vinette in Bups 2 directed by Hyacinth Brown for Spanish town Theatre. Since then she has appeared in 17 plays between 1994 and 2013 including Jealousy in 1999 for Productions Backstage,  Guilty 2009 for Blue mountain theatre and most recently Sissy Tannock again for blue mountain theatre.

Between 1991 and 1998 she co-presented on a weekly radio show for Powerjam FM. She has also done radio work for Bri FM and Rockers FM between 1998.

Allison is also a musician, dancer, poet, storyteller and singer. 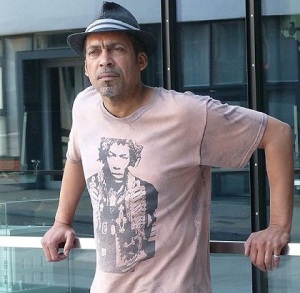 As part of our continuing series production profiles we take a look at actor Ben Onwukwe . Ben will be playing the roles of Boukman and Jean-Jacques Dessalines in the play Black Spartacus.

Ben graduated with a BA performing Arts (Middlesex university) in 1980. He has worked extensively in various media including Theatre, radio, film and television drama.

His credits in theatre include Sunset Baby (world premiere) at the Gate theatre, Pandora’s box at the Arcola theatre,
He played Antigonus at The royal Shakespeare company in 2006 and had the honour of ‘exiting pursued by a bear!’ He has also appeared in Macbeth(out of Joint), high life (Hampstead theatre), the making of Moo (OrangeTree), Man in the middle and Sense of an Ending( theatre503).

His radio work include The LadiesNo.1 Detective Agency, which has continued on radio 4 for 10 years. He was a regular in Westway , a BBC World Service soap Opera that was broadcast to audiences from Accra to Zanzibar!!

Ben can be heard on countless Audiobooks, notably he has recorded several Dreda Say Mitchell novels along with countless London- set thrillers…

Ben is proud to be portraying Titanic characters from the history of the Strugggle for Liberation that began in St Domingue(Haiti) in the 18th century.

As part of our continuing series production profiles we take a look at actress Darcy Charles. Darcy will be playing the House servant Marie in the play Black Spartacus.

Darcy has been a performer since the age of four, studying at and performing for the International School of Ballet in her early years. Her interest in acting was captured from the age of 7 when she spent all her spare time at Centre Stage Drama School, acting, dancing and singing. This led to many performances and the opportunity to take part in variety shows in the West End.

Darcy identified early on that she had a love for dance and physical theatre studying in Islington and performing with the dance group ‘Rouge’ as a finalist in the U.Dance Finale,which took place at the Royal Festival Hall in 2012. She went on to Salford University to study dance theatre, choosing this course because of the opportunities for creative collaboration and practical performances. Darcy is committed to supporting performance and live arts and has qualifications in Stage Management as well and has supported other Artists behind the scenes.

In November 2014 she performed in an Arts Council funded multi – media performance at Media City (Salford) in the Digital Performance Lab. The subject was chronic fatigue illness and the piece was directed by Chris Salt, ‘Gemma Climbs her Mountain’. She took part this year in a collaboration to showcase Salford University work with the acclaimed, cutting edge, physical dance theatre group, Twelve Degrees North at The Lowry Theatre, Salford. Further work includes performances with Company Chameleon for the re-opening of Manchester City Library in conjunction with the band ‘Everything Everything’ for a site specific piece.

For her finals at university she wrote and performed ‘Double Take’ which explored the journey of mixed heritage and racial stereotyping. This culminated in Darcy achieving a 1st class honours degree in Dance Theatre this year.

As part of our continuing series production profiles we take a look at actress Kamesha Francis.

Kamesha Francis is an extremely talented actress with determination and passion to excel in the theatrical arts. At a very tender age, her love for acting has seen her taking on the impersonation of many characters, it is little wonder that acting would become Kamesha’s greatest passion. She has developed her into a naturally talented and gifted actress.

Kamesha actually got her first break as an actress at 15 years old when her talent was noticed by producer/director Kevin Roundtree, who then cast her in one of the main roles in the play ‘The Crucible’ at Hammersmith College, with a stunning performance that received rave reviews. She then auditioned for AAA Success Theatre with director Cheryl Armatrading and again was cast for a major role in the play ‘A Fool’s Paradise’ at The Bull Theatre in Barnet, London. It was there that her stunning performance was noticed by producer Devon Morgan, who then offered her a role in the comedy play ‘You the jury’ to be toured later this year, alongside established actors such as Charles Tomlin, Wayne ‘Dibbie’ Rollins and Angie Greaves from Magic FM. Presently Kamesha is in her 2nd year degree in theatrical Arts at the London College of contemporary arts, pursuing her ambition as an actress. Her idol is Tyler Perry and her aspiration is to work both in theatre and films as an actress.

As part of our continuing series production profiles we take a look at choreographer, performance poet, comedian, producer and actress Sheba Montserrat. Sheba will be playing the role of Suzanne the wife of Toussaint L’Ouverture in the play Black Spartacus.

As a teacher of dance, a choreographer and performance poet Sheba is able to enjoy communicating with an audience through the body or with words. As a dance practitioner her chosen area of specialism is Caribbean dance, in fact Sheba was one of the first five graduates in Europe to gain a Diploma in African and Caribbean dance. The course, run by IRIE! Dance Theatre was the first of her qualification as a community dance teacher and empowers her passion to teach.

Age, gender and differing physical abilities are never considered obstacles or barriers on the way to sharing movement with others! Through performance poetry and stand up comedy the opportunity is presented for Sheba to share social commentary and insights. As a lover of people, Sheba is able to take these observations and social concerns into group workshop settings, in order to stimulate debate as well as to “edutain” any audience.

As well as producing her one woman show SHINE! which premièred at The Bernie Grants Art Centre (2013), Sheba has also produced for the stage, Shackles, The Whip and The Drum: The Creation of Caribbean Dance (2007). Since 2014 she has produced the mothly events Cabaret Dingolay and Poetry loves Dance, blending the night club vibe with theatre, in celebration of spoken word and motion.